And I am back!

Haven't posted in a bit.  We had visitors from Arizona - my sister in law and her husband.  But, like a champ, I was still able to log at least an hour of painting each night.

Here is what I got done in these past few days:

I have also assembled and base coated a squad of 15 Blood Claws. I have 5 WolfGuard Terminators to assemble and paint for this army as well.

This rounds out my daughters Space Wolf army. Current tally, without any thought to wargear is just over 3500 points.  Will probably assemble that last Wolf Guard Squad to be equipped with Thunder hammer/Storm shields, just for melee variety in the other squad. 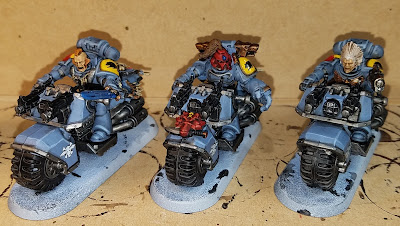 Added by Mike "Warboss" Jackson at 8:46 PM No comments:

And now we are back to painting Space Wolves!

Last 3 Imperial Fists bikes are done, and I will be basing them all on my very soon to come vacation from work.  And I got to get stuck in on painting the last 3 units I have assembled for my daughters Space Wolves:  Swiftclaw pack of 3 bikes, Skyclaw pack of 10 models, and a 5 model unit of Fenrisian wolves.

I've painted her Space Wolves very much like the last set I painted, but this time just a bit different. Instead of doing the agrax earthshade wash, I used what I call a dirty water wash.

This is basically taking a shade, like Nuln Oil, mixing another color into it (in this instance, VGC Air Cold Grey) and using it as a tint to darken the color, but still leave the blue/grey of the Russ Grey showing through.

I airbrushed Russ Grey, and then applied my "dirty water wash" to the model 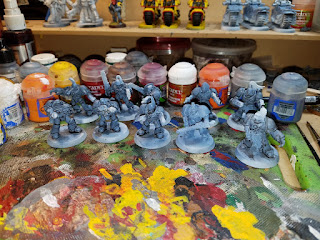 Now to finish the jump packs tomorrow, and I will put together a tutorial on the grey from start to finish.

When the unit gets done, they will look like this: 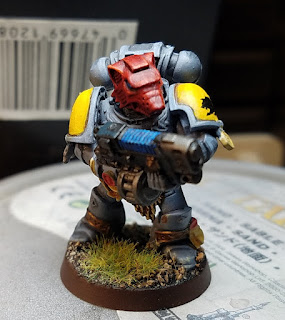 And NO, I have not went back and rebased any of the 15k points of Marines that I own.  I think last count has me at needing to rebase well over 100 models.  I said to hell with that and just have a mixed base size on most of the armies that I own.

Something a little different - IE - A break from YELLOW

Okay, I love painting. I even like to paint red (I used to hate it).

Ok, gripes aside, I am pretty excited about the new Burning of Prospero box set.  Space Wolves, a Space Wolf Character, Thousand Sons, Thousand Sons Character, Custodes, and Sisters of Silence.....And the models are freaking NICE.  I mean, don't get me wrong - I love me some Battle at Calth models......so much that I assembled 2+ boxes of them to assemble 2 different legions....but that new box is just SEXY.

I had a couple of spare BaC models, and decided to give myself a break from painting yellow.....by painting a single character model from each of these upcoming legions!

Taking some Space Wolf bits (I have a ton of them), I modeled a Space Wolf Jarl, Ornulf Fullblood. The color pallet stayed pretty tame on this guy - Primed black, then shot with GW Mechanicum Battle Grey, followed with highlights of Dawnstone and Fenrisian Grey. All grey areas were pinwashed with Nuln Oil. The reds were done in Mephiston Red, glazed with Carrowburg Crimson, rehighlighted with Mephiston Red, and then Evil Suns Scarlet. Golds are Retributor Armor, washed with Agrax earthshade, and then highlighted with Retributor Armor and Runefang Steel.  I applied decals from the generic Space Wolf decal sheet and the Grom Hellgaze sheet. I like how he came out - more grey than the modern 40k Wolves with the blue grey. 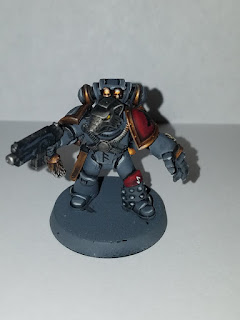 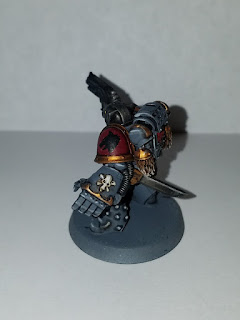 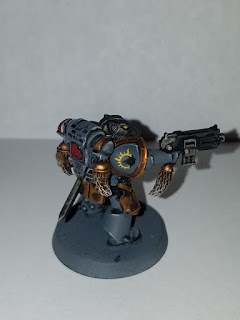 This guy got a bit of extra treatment.  I used the standard Mark IV marine, but positioned him on an open book (from one of the Dark Angels Vehicle frames).  I used the pointing hand from the Devastator box, and the staff arm from the Grey Knight Strike Squad. I included some scroll bits, as well as a open hanging book from a high elf model.  Initially, I was going to go for the whole metallic red (painting the model silver and applying numerous coats of red glaze) but I did not have a red glaze and my numerous attempts to make one failed.  So I went with red.  The model was primed light grey, and then base coated with VGC Air Blood red.  The red was pinwashed with Carrowburg Crimson, and then layered with Evil Suns Scarlet, followed by highlights of Wild Rider Red, and then final edge highlights of Fire Dragon Bright.  Golds were done identical to the Space Wolf. With no decals to work with, I hand painted the Thousand Sons symbol, and then did the black script work on the books.  The blue areas were painted with P3 Arcane blue, washed with Drakenhoff Nightshade, and then re-highlighted with Arcane blue. 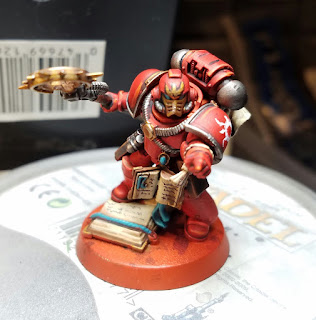 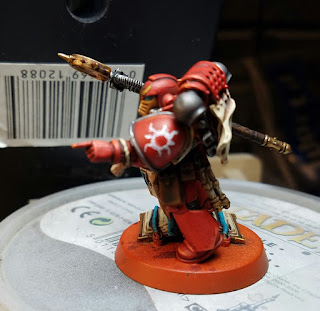 Well enjoy folks - I am off to get ready for another fun filled day at work!

Added by Mike "Warboss" Jackson at 9:37 PM No comments:

So, before calling it a night last night, I finished off the bikes.  Not the riders too, mind you, but the bikes themselves. 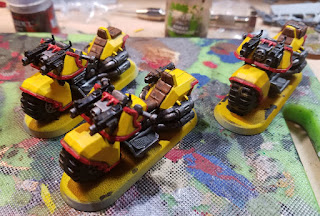 After the black wash was dry, I used GW Averland sunset to do any clean up work, and then applied 2 thin coats of GW Yriel Yellow.  I lightened this further by applying a layer of GW Flash Gitz Yellow.  All of the banding on the armor plates were painted first with GW Mephiston Red, followed by a layer of GW Evil Sunz Scarlet, and an edge highlight of GW Wild Rider Red.

Tonight, after work, I applied the same process to the riders. 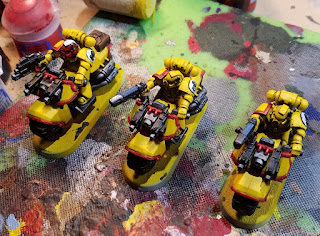 After painting everything else, I painted the helmet on the Veteran Sergeant with the red combo from above.  On the molded Imperial Fist shoulder pad, I painted the raised disk and fist GW Abaddon Black.  I then applied a highlight or GW Fenrisian Grey, and then painted the disk with 2 thin coats of GW White Scar.  The power cells on the plasma guns were given a basecoat of GW Fenrisian Grey, with an edge highlight of GW White Scar, and then washed with GW Drakenhoff Nightshade.  I like this look better than the tacky "glowy coil" way that everyone else wants to paint plasma weapons.

I then went ahead and glued the bikers to the bikes.  Now I will apply an edge highlight to the yellow with a 50/50 mix of White Scar and Flashgitz.  I hate the way yellow looks with white highlights, so the faint edge highlights will stand out once matte varnished.
Added by Mike "Warboss" Jackson at 9:29 PM No comments:

Well, with the Death Guard Legion complete (for now), I am heading into my "needs paint" pile to start working on other projects.

For those that don't know, just about my whole family plays 40k.  My wife, until recently, had a very nice Dark Angels army, heavy on the DeathWing and RavenWing.  My 11 year old daughter has a Space Wolves Great Company and by 9 year old son just about has a Imperial/Crimson Fist Demi Company.  Normally, every year, I allow the kids to pick out a unit to be added to their armies.  Last Christmas was a 6 model bike squad and an attack bike.

I had a spare bike a converted up a bike commander for him a couple of years ago, and it has remained his favorite model.  Last night I knocked the dust off my yellow paint pots, and put 4 hours into the attack bike. The trick to getting this yellow this bright is to paint almost everything else before that is painted. 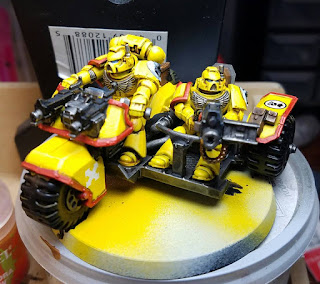 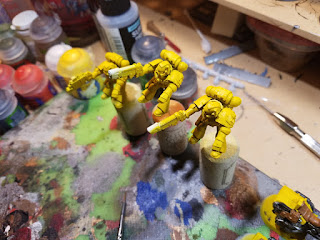 I then blacked out all areas to be metallics and the tires with GW Abaddon Black.  I painted over the leather pouches and seats with VGC Beasty Brown. 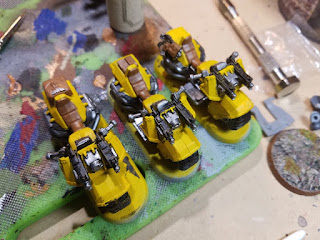 All metallic areas were painted BW Leadbelcher.  This will follow up with a wash on all metallic/brown parts with GW Nuln Oil.

Once dry, I will use GW Averland Sunset to re-prep any messy areas, and then give all of the yellow areas a thin coat of GW Yriel Yellow.  Then the real fun starts.
Added by Mike "Warboss" Jackson at 8:12 PM No comments:

Well, again another productive day.....bringing my 30 dayish paint binge to complete a 1500 point Warhammer 30k Legion to a close.  I ended up with 1966 points. Of course, this can always be increased with wargear, but I am pretty happy with what I have done.  Based on some suggestions from a good buddy Kyle, I merged the 2 Grave Warden squads into 1 squad, as they have a tendency to be bullet magnets.

As soon as I get the other 5 plastic Cataphractii from Dave, the list will be bumped to almost 2500 points, with the addition of a 10 man Cataphractii unit, all with Combi-bolters, combiflamers, and Powerfists. Well, technically 2395 points, leaving me over 100 points to slather on some wargear somewhere!

And here they are in all their glory. 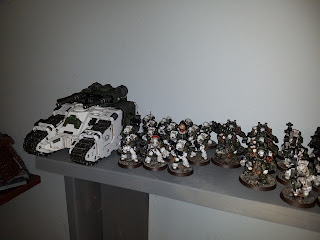 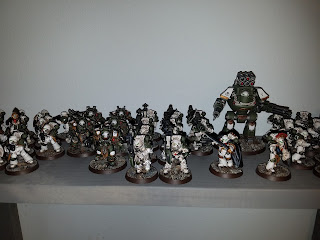 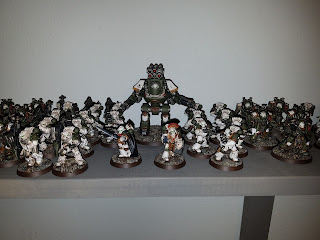 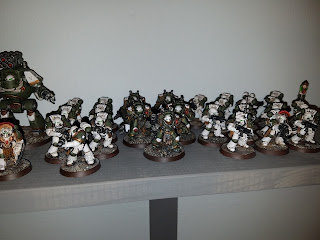 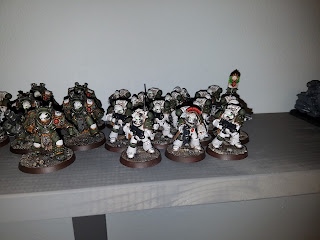 Added by Mike "Warboss" Jackson at 9:27 PM No comments:

So, try as I might, I could not figure out how to get 10 Mark V Heresy Pattern Marines to "fit" into my Ultramarines legion, so they were relegated to the Death Guard, too be used as a Tactical Heavy Weapons Support Squad.  My second Sicaran Battle Tank also was moved to the Death Guard.

I painted the Heavy Squad first.  I used the same technique as the tactical squads, but the models ended up coming out a bit darker than the others.  Not much I can do there.

Oh and have I mentioned that I LOVE Shark Fin Missile Launchers? My buddy Dave, however, doesn't, so he sent me a batch of them ,and combines with what I already had, I had enough to equip 10 marines with launchers.  And yes, in 30k, the sergeant carries the same weapon as the troopers.

So an update on the army as I have it put together so far:


Tomorrow, I will get updated pictures of the whole Legion.  I am working on Basing and waterslide decals currently.  And yes, I have them all painted now!

Added by Mike "Warboss" Jackson at 3:06 PM No comments: