In the Dark Imperium box set, next to the Lord of Contagion, the Foetid Bloat Drone is the centerpiece of the army.  It is an eye catching model, taking the best of the design that Forge World had created for the bloat drone, and made it even better.

Assembly was straight forward, but in hindsight, I should have left the guns off until after painting. It has a very large base, and I didn't have the resin or other nice things like the Sector Imperialis base to spiff it up, so it will be done with just straight texture instead. 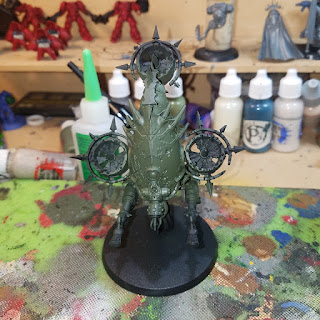 I assembled the model and primed it black with Vallejo Polyurethane Acrylic Black Primer and then base coated the model with GW Castellan Green, both ran through an airbrush. 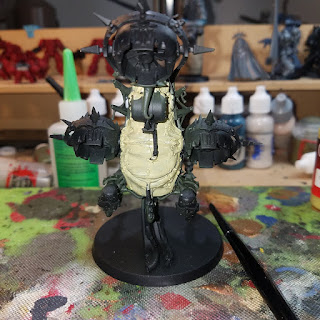 I then painted the rear of the model, which looks like a bloated flesh sack, with VGC Sick Flesh. 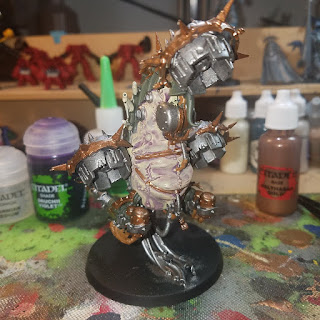 This was followed by a wash of GW Druchii Purple, mixed 50/50 with GW Lahmian Medium. 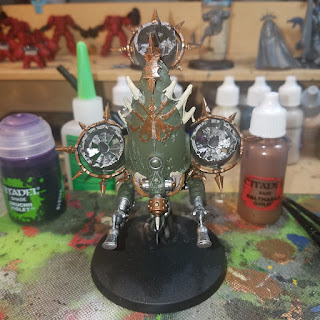 After this was dry, I started color blocking out the rest of the areas.  Hoses and piles, guns, and centers of the engine fans were all painted in GW Leadbelcher.  Decorative trim and various other pieces were painted GW Balthasar Gold. Some of the hoses had this weird kind of sheathing on them, so I painted those with VGC Beasty Brown.  All of the horns were painted in GW Ushabti Bone. 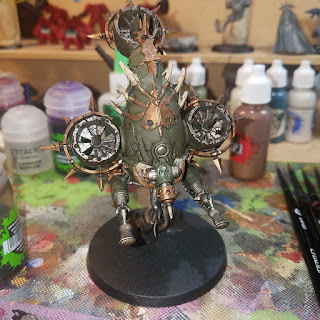 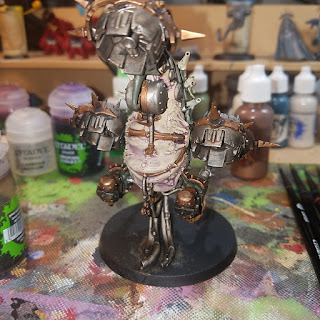 Once all dry, I applied a wash of GW Agrax Earthshade to those areas. 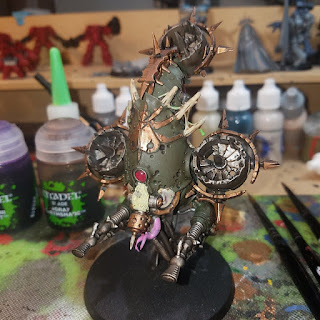 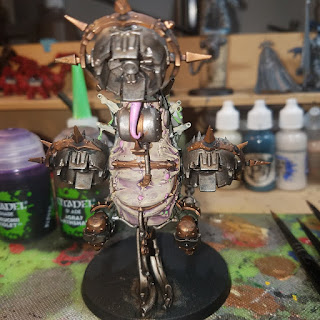 I added VGC Sick Flesh to the "face" area as that appeared to be fleshy, and then GW Emperor's Children to the tentacles on the front and back. 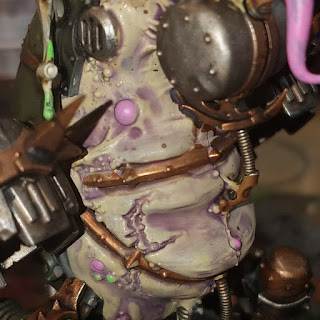 I also added pink, as well as VGC Scorpy Green to the larger pustules on the drones flesh areas. 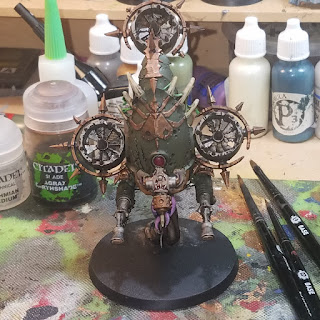 Using the same wetbrush technique I used on the Plague Marines, I brought the dark greens areas back up, applying a wet brush of GW Castellan Green, then GW Deathworld Green, and then finally GW Straken Green.  The gold areas were given a fine highlight of GW Balthasar Gold. I painted all of the stringy bits between the carapace and the horns with VGC Scorpy Green, and gave them a wash of GW Biel Tan Green.  For the eye, I painted this GW Khorne Red, followed with a GW Nuln Oil wash. 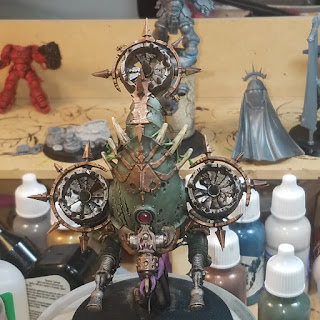 Once the eye was dry, I reapplied GW Khorne Red, and then did a bottom edge highlight of GW Evil Suns Scarlet.  I followed this with a dot of GW White Scar in the darkest portion. 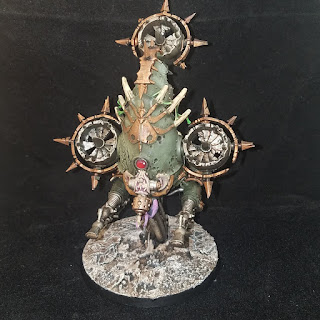 And here is the finished model.  I think this was my 2nd favorite out of the Nurgle models to paint, next to the Lord model.