Continuing my series for newcomers to the Hobby Tabletop Game series, I am going to show how, with the use of the tools that I have already shown, we can do simple assembly on a plastic model, in this case, a Games Workshop Primaris Space Marine Intercessor Sergeant. 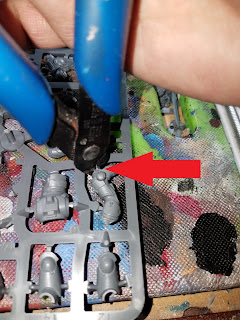 After selecting the parts to assemble, grab the small angle cutters, and locate the part.  Put the flat of the angle cutter against the surface of the part, and carefully clipp it out. 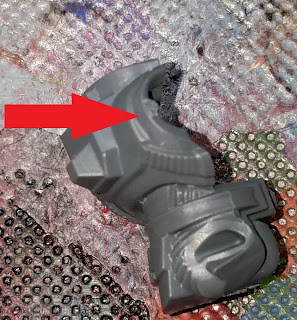 After removing the part, look at the point where it attached to the sprue.  If there was going to be any mold lines, this is where they would run from and run the length of the part. 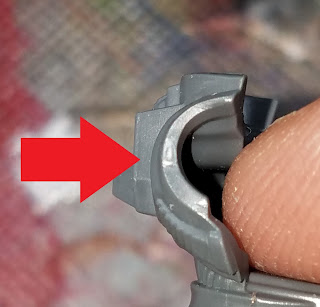 Take the hobby knife, and angle the blade AWAY from the fingers, scrape away the mold lines. 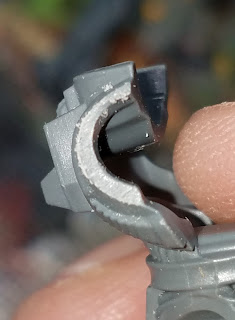 For any on a wide open area, like the front of the leg greaves, use the emory board or needle file to remove the mold line. 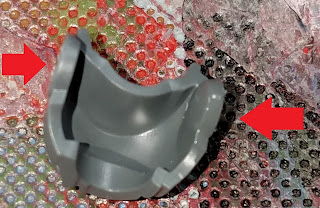 Using the plastic glue, put a small amount on the mating surfaces.  Remember, a little goes a long way. 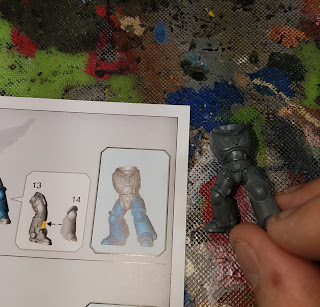 Repeat until all parts for that model is assembled.  With plastic glue, the model must be set aside for at least a 30 minutes to set up so we can continue working.

For a better understanding of the whole process, from start to finish, please take a look at the video below!


Added by Mike "Warboss" Jackson at 11:44 PM No comments: Links to this post

Continuing my New to the Hobby Tabletop Game Series, I want to talk about hobby tools.

I used to own an LGS, and would weather the stares from moms and dads as they came into the shop, looking to set their kid up with a starter to Warhammer or any other hobby game.  Much to their dismay, there are a lot of tools that the new gamer needs to be able to get started sticking their little plastic army men together. 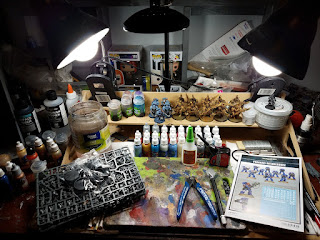 I'll cover the absolute basic tools and their uses, just so the new hobby gamer can understand what they may need, and cover some advanced tools that I also use, to do other fine modelling work. 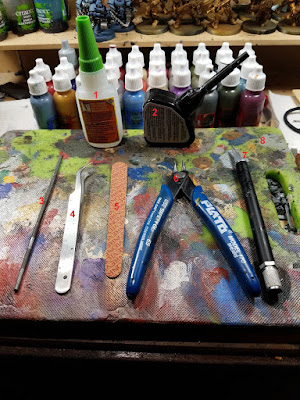 Shown here are the very most basic of tools, and their uses:
This is the very minimum that any person building models should have at their disposal.  However, it is not everything.

There are times when we need a specialized tool for a particular task, and the one listed above will not cut it. 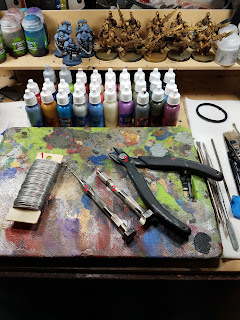 Okay, so here are some of the tools that, as a hobby gamer starts to do more and more modelling, they will want to add to the tool box.

Again, even with the two sets of above tools, there may be jobs that require a bit more of a specialized tool to get the job done.  The hobby knife and angel cutters are only going to get you so far.  In the event that I need to do some precise cutting through thicker materials, I have the below: 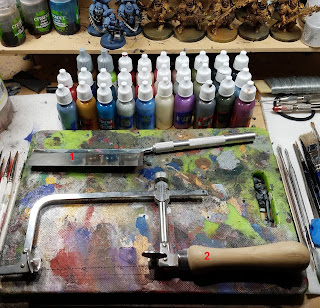 This pretty much covers all the basic tools I use to build models. There are others that are used for airbrushing, terrain making, etc, but I will leave that for another article.  So, there is the equipment list - go get equipped and get to modelling!

Stay tuned for the next article - Plastic Model Assembly basics.

Added by Mike "Warboss" Jackson at 8:47 PM No comments: Links to this post

Mine is a constant mess - partially contained chaos, but for this new series of posts I am doing, I straightened up (okay, not all the way) to show what the method to my madness is, and how I have my hobby space setup. 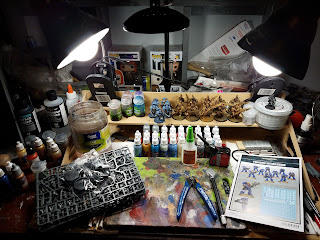 I'm a lucky guy that has been allowed, for the extent of my adult life, to be granted a permanent home to my painting area.  While it has evolved over the years to incorporate more and more tools, bits and bobs, and generalized clutter to become the spectacle pictured above.  Understand that this is not my full hobby area.  I have a 72 inch desk that includes my airbrush setup, a home built rack for all my paint, a swing arm camera for filming unboxings and hobby tutorials, a couple of finished model shelves, a bookshelf for my gaming books and projects still in box, as well as a couple of massive bits boxes.

I will cover just the basic hobby/painting area, and will move into the other areas as I expand on this series of articles. 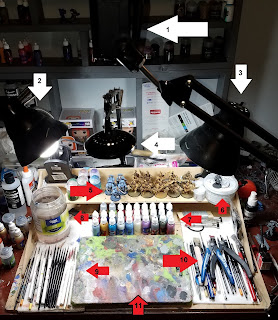 Okay so let me explain what is going on here:

Stay tuned for the next article - Basic and Advanced Hobby Tools!


Added by Mike "Warboss" Jackson at 6:41 PM No comments: Links to this post

Going to the tournament!

Today, my friend Tom and I went to a tournament run by the good guys over at the Forge World Columbia gaming club and Mageling Games in Columbia, Missouri. For those new to the tabletop community, most games will have some sort of organized gameplay events, and a lot of the FLGSs (Friendly Local Game Store) will run them with some regularity. A couple of weeks ago, I saw an event pop up, and talked Tom and figured we would go push some plastic army men, chuck dice, and make general fools of ourselves, away from the family for a few hours.

Before I get into the Tournament Review, I want to talk about tournaments and a few pointers. After building your list, checking it twice, making sure your models are ready to go (painted, based, have arms and heads), stop a few minutes and do yourself and the Tournament Organizer (TO) a favor - go back and review the restrictions on the tournament.

There's a story coming up in all of this, I promise. I am, in particular, a Warhammer 40k player, so I will talk about 40k events, but the same can be said of most events of this type. Most events will post the rules and expectations of players, well ahead of time. Currently, the favored tournament formats are Independent Tournament Circuit (ITC events), although run by different groups, will use very similar sets of rule.

The most popular being Frontline Gaming's ITC - Responsible for the Nova Open, Las Vegas Open, and Adepticon.  These events, along with others that register for the series, are all linked together, in a huge database of players from all over North America.

Before building your list out, take the time to familiarize yourself with the rules (usually available months in advance) and any army construction restrictions. 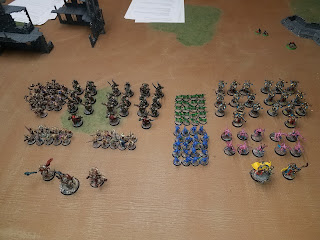 We played a test game against 2 1k lists made up of Ultramarines Primaris Marines, and Space Wolves, and determined that for ease of play, so we didn't drive our opponents crazy not fully knowing or remembering our rules, we would use these two armies instead.

We built out our lists, packed up our (okay, my armies, because I am a paint snob) and headed off to the event.  Everything was going great, chatting with the guys, hanging out, until we went to list turn in. Had I checked the Adepticon and Event post on Facebook more carefully, I would have known this and been able to build our lists to be correct and LEGAL for the event. 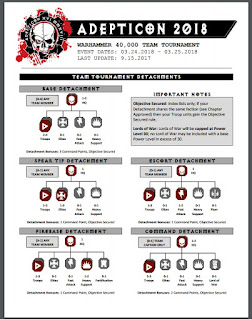 Ben, the TO at the event allowed us to play anyway, and we made sure to inform our opponents. Gratefully, all three sets of our opponents didn't complain about this infraction, and we were allowed to play.  In larger events, we would have been DQd and sent packing.

We went 0-2, first game was close, second was a solid victory, and third was an all out disaster.

I'll compile all the tournament stuff I collected and post again here in a few days.  But for now, enjoy some pictures: 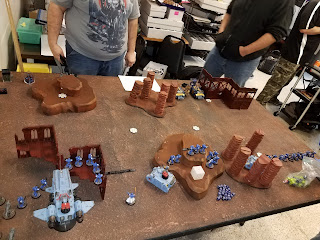 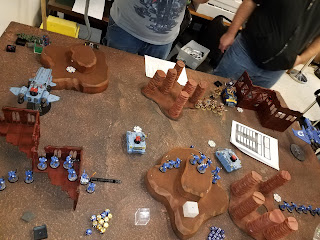 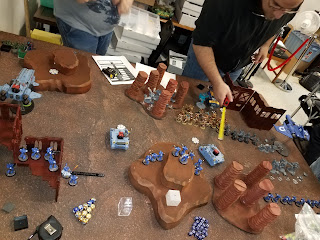 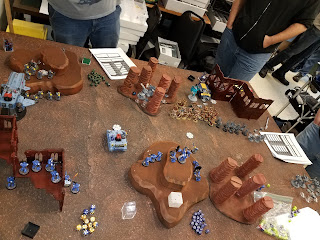 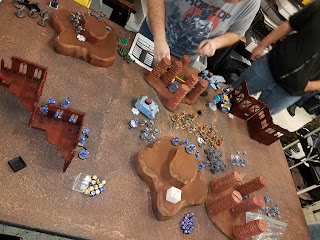 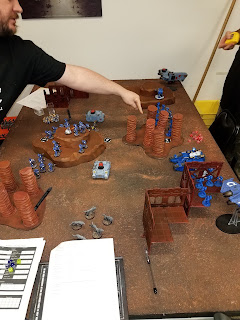 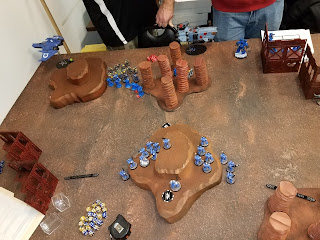 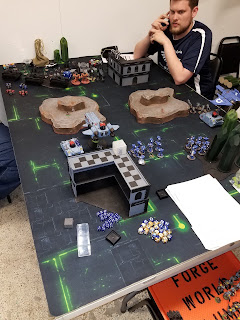 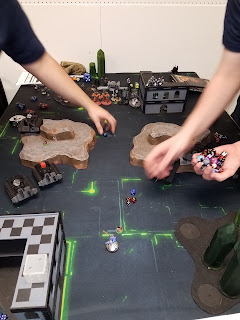 Added by Mike "Warboss" Jackson at 11:24 PM No comments: Links to this post

So, thankfully, I got a bit of time to work up a tutorial on the Goliath models from the new Necromunda boxed game from Games Workshop. 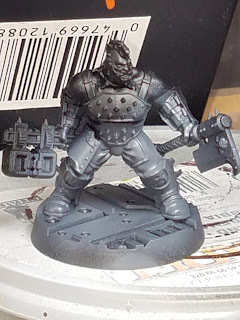 I started off with a coat of black Vallejo polyurethane primer, followed with a coat of GW Mechanicus Standard Battle Grey, shot on the bottom half of the model. 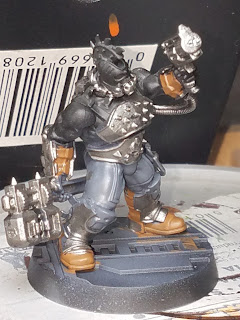 Boots and straps were painted in Vallejo Beasty Brown, and the metallic bits in GW Leadbelcher. I painted the areas that I wanted red in GW Mephiston Red.  The model was then given a thinned wash of GW Nuln Oil. 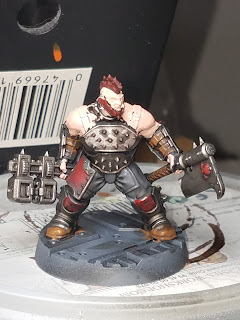 The flesh was painted with P3 Midland Flesh.  I painted the remaining straps with Vallejo Beasty Brown. 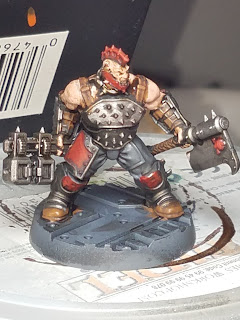 I applied a wash to these areas with GW Agrax Earthshade. Be careful of the wash, to make sure that it doesn't pool. The grey was highlighted with first with GW Mechanicus Standard Battle Grey, and then an edge highlight of GW Eshin Grey, the red with GW Mephiston Red, followed with a fine edge highlight of GW Evil Suns Scarlet.  Metallic areas were re-highlighted with GW Leadbelcher.

Now all that is left is to paint the bases up, paint up some Eschers, and actually get a game in.

Hope you all enjoy!

Added by Mike "Warboss" Jackson at 9:42 PM No comments: Links to this post