So, along with 7 Plague Marines (7 is the Chaos Gods favored number), the Warhammer 40k Dark Imperium also comes with some pretty spectacular Death Guard Characters.

Malignant Plaguecaster armed with a corrupted staff and bolt pistol. 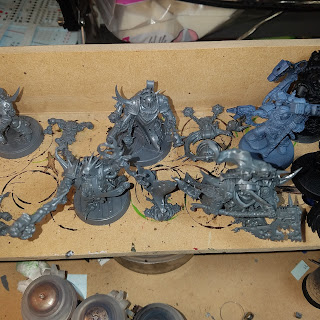 I have to say, these are some of the nicest core set models ever produced.  Not a lot of room for conversion, but really well sculpted and a great representation of the high powered followers of the GrimDarks Lord of Decay.

For this paint tutorial, I am using a variation of the paint scheme I posted here.  I figured that the more powerful models would be from the original legionnaires of the Death Guard, just warped after 10,000 years in the eye of terror. I block painted all three models at one time, as they are all using the same color scheme. I left the Lord off of his base, as I wanted to do a more scenic base for him, as well as be able to paint the inside of his cape. 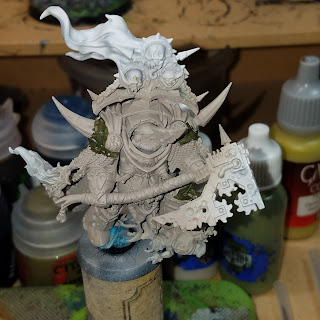 I started off with a white primer followed by a coat of GW Rakharth Flesh, both applied with an airbrush.  I took GW Castellan Green and blocked out the shoulder pads. 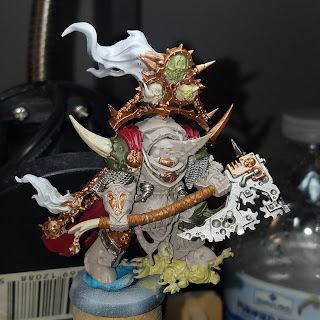 I then blocked out the cape in GW Khorne Red, leather straps and doodads in VGC Beasty Brown, mail and axes blade in GW Leadbelcher, smaller details in GW Balthasar Gold.  For the three heads in the Nurgle Icon, I went with GW Rakharth Flesh for the skull, GW Deathworld Green for the Plagueberor head, and VGC Sick Flesh for the Nurgling Head and for the pile of Nurglings that the lord is standing on. 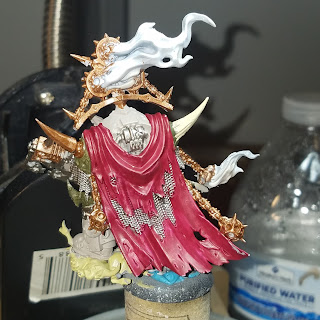 A quick shot of the detail on the back. 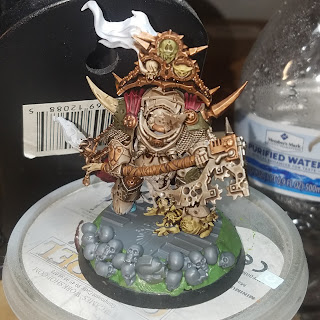 Once all of this had dried, I gave the model a wash (the whole model) with GW Agrax Earthshade.  I left it to dry and setup the cooler base, which the model is pictured on above. 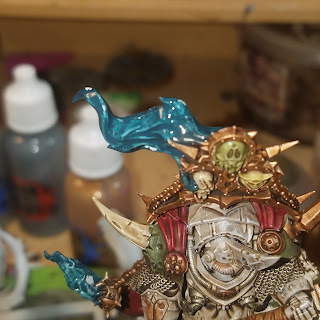 For the smoke pouring out of the braziers, I applied a mix of GW Sotek Green and GW Abaddon Black, 75/25. 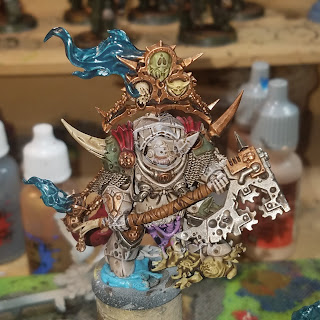 To start re-highlighting the armor, I used GW Rakharth Flesh and applied a wetbrush technique to all of the bone armor parts.  Using the same technique, I reapplied the base colors on the green, red, gold, and silver. The entrails were painted in GW Emperors Children, and then washed with Drakenhoff Nightshade.  Any flesh protuberances were painted in VGC Sick Flesh, and given a thinned wash of GW Druchii Violet. 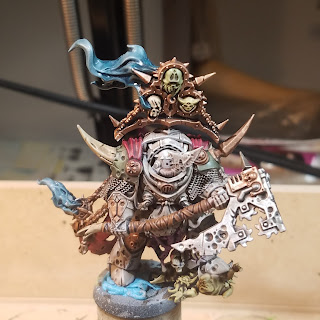 On the smoke, I applied successive layers using the same wetbrush technique, adding GW Dawnstone to the Sotek/Black mix.  I added in a drop at a time, successively, until I reached the Dawnstone color. A further applied the wetbrush technique to apply GW Pallid Wyche Flesh to the bone areas, GW Straken Green to the green, and GW Mephiston Red to the red areas.

And here are the finished models! 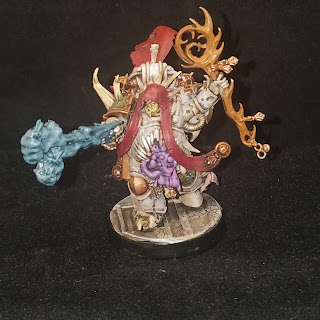 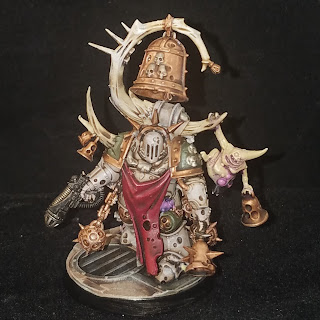 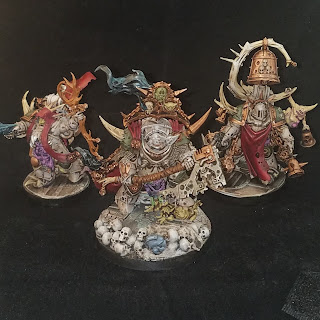 I hope you all enjoyed, and can use this while painting your own true followers of the Sickly Way.